The journey to Salt Lake started early enough. I couldn’t sleep the night before; constant tossing and turning and anxiety kept me up. Even though I slept an hour past my alarm going off, I still managed to leave on time.

The first part of the journey was easy enough. Desert and red rock canyons filled my view for a good 2 hours. I pulled over once to take some pictures. The desert looked picturesque compared to Vegas’ sparse vegetation. I hit the halfway point at 3 hours and stopped at a Love’s. (If you’ve ever roadtripped from LA to SF, Love’s is the halfway point up there too so it was nice to see a familiar face on the way up to a new destination.)

This Love’s smelled like brown sugar and was quietly playing Johnny Cash when I walked in. I took some time to stretch before I gassed up and continued on my way to my first roadside attraction: Meadow Hot Springs.

Meadow Hot Springs sits in a small town of Meadow, Utah. It’s a little off the beaten path and in an isolated dairy farm area. When I arrived to the spot, I was very aware of the quiet. No sounds of cars passing by or cows mooing or crowd murmuring. Just the soft rustle of wheat when the chill breeze passed through.

There were two people in the hot spring when I arrived. Being by myself for awhile makes me a lot happier to see people. They didn’t stay very long though, and by the time I had finished changing to go for a swim, they were headed back on the road. This left me with the hot spring all to myself. I was soooo excited until I realized all the algae on the rocks made everything slippery and slimy. I agonized over getting into the water for half an hour. I was so upset and anxious. I found a spot to dip my feet in and take pictures while I worked out my dilemma of the slimy rocks. I almost gave up. I was ready to pack up and leave when I thought: “Are you really gonna let something as silly as slime ruin what might be a once in a lifetime opportunity?”

The answer was a hard NO. But I was still scared and nervous. I figured if I moved fast, the slime would only hurt for a second and then it would be over. I braced myself and finally took the leap. Afterall, how often would I have a public hot spring all to myself ever again?

The hot water felt amazing, even if it stung for half a second when I made it in. And then it was just me immersed in the warmth of the hot spring, a crisp breeze, and the quiet. Just a small moment where I had the entire world to myself. 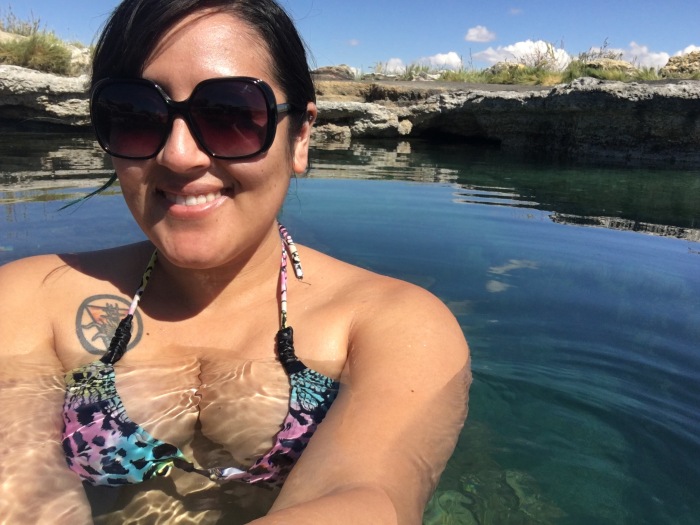 Sometime and several photo ops later, I was back on the road, continuing my journey to SLC. I began listening to Aziz Ansari’s audio book, “Modern Romance” and was immediately touched by his findings on the modern woman and marriage. He states that in his research he found that the older generation of women married much younger in order to gain their independence.That if they had a chance to be more adventurous and put marriage off, they would have. What they wanted was to see the world, to be more than homemakers and child-rearers, and that the time for taking risks was when they were young.

His findings made me grateful that the opportunities I’m taking now aren’t shrouded in stigma and shame. They reinforced the idea that this adventure is something I need to do for all those who can’t. For all those who couldn’t.

The last leg of the journey was tough. My back and leg were aching. My trip to the hot springs set me back an hour and I wound up caught in 5 o’clock traffic. On top of the fact that somebody thought it would be a fun idea to figure out where we were staying once we actually got to SLC. (That was stupid, why did I do that?) I lucked out and found a good airbnb but the stopover at the gas station with the attendant deciding to powerwash the parking spots all around me, gave me much anxiety while booking. 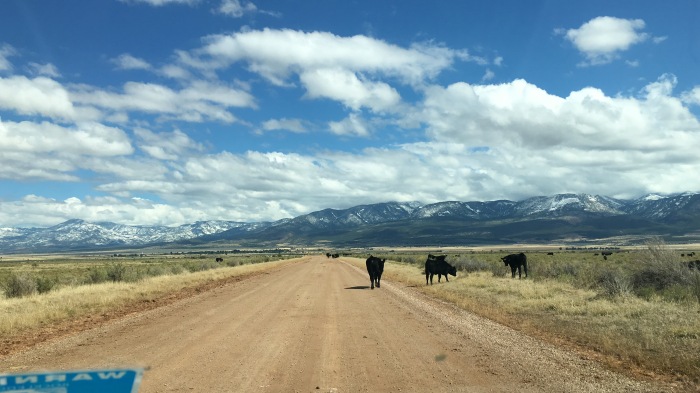 And so, I’m here. One trip to Del Taco later and I’m all settled in. I can’t wait to see what tomorrow has in store for me. Right now, I must deal with the fact that SLC is a lot cooler than I expected it to be. Good thing I brought my peacoat and scarves with me although I definitely underestimated needing them so soon. The leaves are turning orange and red on the tree right outside my window. The blazing hot days of summer are officially over and fall is finally here.

There was an error retrieving images from Instagram. An attempt will be remade in a few minutes.